The Gap begets Two-space – a conversation with Lou Mallozzi

Lou and I met in my office at SAIC, a late afternoon in December of 2015, on a day when we both taught. We have known each other for many years, I’ve attended presentations he gave about his work and over time have seen and heard quite a few as well. Lou calls himself an audio artist. He speaks 3 languages, and while he does so no longer, has played bass for 20 years, until 1990. He just stepped down from the position of executive director of the non-profit he founded in 1986, the Experimental Sound Studio (ESS).

How do you work?

It’s impossible to conduct a regular studio practice, Lou brought up first. Everything is channeled through projects. He then cited a conversation with Iñigo Manglano Ovalle, agreeing that “the best pieces come from jokes, non sequiturs – a single image, idea or moment.” These images might arise suddenly, in response to things, to places, and to social relationships. Next came: “I don’t really write music.” What he emphasized instead was listening, attending to cues, and permitting parameters to emerge from bodily interactions and relationships with instruments, collaborators and social settings. He calls these behaviors “virtuosic listening strategies.”

All relationships are seen as containing built-in ruptures. Examples of early works include often bi-furcated, process based drawings that are the residue of physical acts. Pushing that notion further and continuing to cite Process Art as a frame, his work thus comes out of interaction with productive impediments, a testing of limits, a struggle to accomplish something that actually, physically, cannot be done. Lou values the humility this meeting of limits induces, and likens it to the productive ignorance experienced when speaking a foreign language.

Language is the through-line for all of Lou’s work. With that, it does revolve around sound, including improvised music and sound, but not exclusively so. He works individually, collaborates and directs. Work is conceptualized for radio, theater and architectural settings, as intervention, performance, installation or hybrids of the above. Text based sound work came out of literary experiments, process based approaches and performances. At its inception, there was little theorization of sound art. Resisting the umbrella of musical discourse, Lou, also through founding ESS as a platform, worked towards a position that contained musical aspects, but would not frame the work as composition, instead setting it up as sound poetry or more broadly, sonic/linguistic work.

Language to Lou is a space, not a tool. It is established between interlocutors, weaving dynamic relationships that are continuously reconstructed. Visualized, language is a sphere, made up of meaningful, poetic utterances, before it becomes a technology of communication, or a stream. Roland Barthes’ notion of conjured references, Heidegger’s perception of language as somewhat autonomous entity ring true.

Lou initiated ‘Projects Against’, in support of the sphere and subverting the stream. In one of these projects he deployed existing terms, using alternate suffixes, moving from    -ology (knowledge) to -agnia (avoidance). Spatial metaphor is deployed as well when Lou sites voice as operating in a gap, neither interior nor exterior to anything else. He asks: “What if the gap comes first, with borders constructed after the fact?”

Grasping the central themes of the conversation, the three axes of the Matrix are Meaning (horizontal), the Body (top left to bottom right), and the Social (bottom left to top right). Meaning’s outliers are Two-space (left) and Gap (right). This axis takes hold of Lou’s question: “What if the gap comes first, with borders constructed after the fact?” It loops back to his opening remark, grounding good works in jokes, or non-sequiturs. A non-sequitur comes from nothing. A joke ruptures expectations. The gap precedes boundaries. From it rise utterances, conjured images that, when related to the already bounded can become jokes. The already-bounded is called two-space, in reference to Lou’s mention of his often bi-furcated drawings. In it reside models, armatures and borders into which non-sequiturs have been condensed. Here one can be in charge, contain meaning, but also dissolve it again.

The Body’s Actual Being (left), its innate, physical and valuable resistance as it brushes up against limits and struggles with impediments, is made fruitful with Discipline (right). Virtuosic Listening attends to the sonic and the linguistic, through tactile, improvised, collaborative and performative avenues.

Traveling along the Social axis, the sphere of Poetic Language (right), with its dynamic constellations, which are also the forms of works of art take and find themselves in, begets the stream of Communication (left), where linear discourse attempts to know, translate, understand.

Thus, on the left side of the matrix are stacked, from bottom to top, -Agnia, Model and      -Ology. These are the relations to certainty Lou has elaborated. -Agnia foundationally refuses it, Model, in the middle, mediating, works it. At the top, -Ology owns it. The stack on the right speaks to attention, to attending. Virtuosic Listening is ever-ready for arising non-sequiturs. Constellations carefully align what Virtuosic Listening grasps, in temporary, public settings that can be deployed to melt the entire stack on the left, right back into the gap. 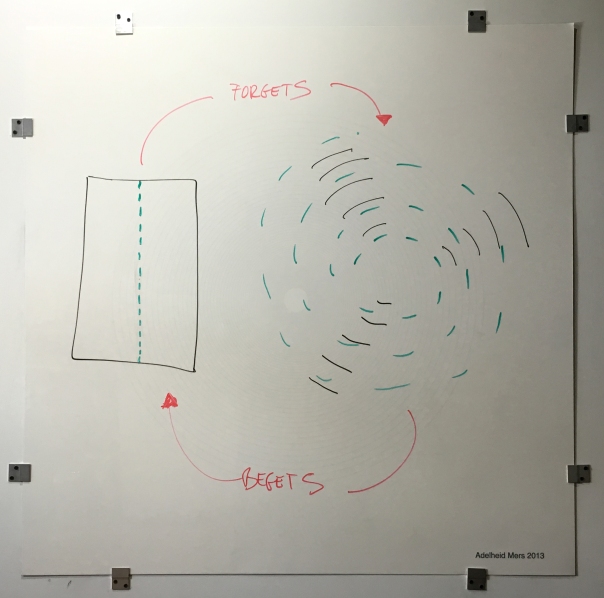 The scenario then takes hold of a cycle: The Gap begets Two-space. Two-space must preserve its origin, precisely in being bifurcated, marked by a linear navel. It then forgets the Gap. Lou Mallozzi’s work, reaching into the Gap, melts bits of Two-space back into it, less to forge a new iteration (although it can’t be done without that), but to humbly show up the process. Beget. Forget. Beget.

This conversation is part of a larger cycle of ongoing interactions with musicians, composers and experimental sound artists. They were mostly led in Chicago and Vienna. A video of a performance Lou staged in response to the above is posted on the Chicago page.