Thinking in Threes – a conversation with Deborah Boardman

July 18, 2014, I talked with Deborah Boardman, who had come to the Chicago Cultural Center so I could ask her about how she works, as I’ve been asking other artists since summer 2008. We sat at a table off to the side, along the east wall of the expansive public space on the first floor, outside my exhibition of diagrams, which we had walked through for a bit first. The municipal AC was blasting.

I took notes. Deborah said: “I think in threes, always.” She explained. There’s actively painting. There’s an intermediary stage, and there’s grunt work. The intermediary stage was elaborated first. It is characterized by free-flowing thought and serendipity. Things overheard are captured in sketchbooks, as lists and in open-ended image making. The grunt work, in contrast, is intentional. It presents an intellectual anchor. Research and readings on current topics, and also meetings and conversations with people, strangers as well, provide excitement and inspiration. Concept and substance are assigned to this realm. What is acquired or considered here cannot just be executed, though. It contrasts with the flow of making form, as experienced in actively painting, which is laden with an unbearable anxiety – is it the right form? Thus, there is great tension between actively painting and intentional research, full of frustration and perceived misfirings.

The activity of painting first of all requires physical movement. Thus, it can be initiated by moving in the studio. Sweeping. Dancing. Singing. Those preparations ease anxiety, the fear of the empty space. They promote doing it anyways, in iterations, in the face of not liking the results. Throughout, unanticipated convergences occur, components find each other. The sketchbook helps here, too. Actively painting also hooks back into the grunt work. In connecting to the research stream, what becomes apparent is that liking or not liking ‘it’, which is form, is superseded by presence. Ego is suspended in tying into a larger truth, being part of something larger, being present for it.

The larger truth coincides with the larger collective, the unique circumstance of being human. The individual expression by an artist then creates space and movement, may encourage others to do likewise, weave a larger pattern of communal expression. Deborah wondered if this could be likened to social sculpture.

I asked how she selected her materials, the medium. Painting had seemed like the default. Childhood excitement was met with praise, and even though she tried other things, she always returned to a deep, physical satisfaction evoked by brush and paint. Those ignited primordial feelings.

When I inquired about themes, Deborah emphasized ‘humans as part of nature’, framing nature to include the built environment and institutions. A first iteration of that she cited contending with were Mary’s stations of the cross as female suffering, asking what lies beyond a male hierarchy. Looking later at flooring and what is underneath the floor in churches, older ones in Europe and even older settings in India, Deborah said she sought evidence of encompassing systemic understanding, so deeply complex that it might be holistic. In India she felt that artifacts of daily life embodied that systemic presence, something absent in the US. Returning to painting, she described the canvas as a surface that opens up, that dissolves into understanding, standing under. Entering the notes into the Fractal 3-Line Matrix diagram template

We took the notes from our conversation across the hallway into the gallery. There was no need to parse them for three prevalent premises, as the template requires, since Deborah had already framed her way of working through three headings. We entered each on one of the intersecting lines:

Horizontally, we wrote: Actively painting. Terminal points of this axis (each axis understood as a gradation between the end points) were Anxiety and Flow. Elaborating on the conversation, Anxiety was further broken down into Void, Judgment and Right Form. It appeared that each of those terms had a negative connotation we collectively named Blocks, consisting of Comparing, Fear and Resistance, which then merged into the positive poles of Knowing, Intuition and Doing it anyways. That was mirrored in the clarification of Flow, specified through Movement, Singing and Tactile Experience, carrying the Enablers,  Pleasure, extending to work with Tools; joined through the newly introducedKundalini (replacing initially noted Masturbation) to Walking/Dancing/Sweeping, which is related to work with Paint; and Improv, exemplified through work as Singing Along.

Sloping left to right: Sketchbook: Serendipity [Attention to Emergence], was flanked by Overhearing and Thinking. The Sketchbook axis served to join an exterior realm connected to overhearing to an interior realm containing thinking.

Rising left to right we entered: Research, bracketed by Concept and Substance. Deborah saw Concept as rigid, framed and structured, marked by Ego containing both Liking and again, Knowing. Shape could be arrived at by Mapping or Uncovering. Moving towards Substance, the communal realm was emphasized with Relation (Personal to encompassing all of Humanity), Larger Truth (Incarnate and Unknowable) and Witnessing (actively through Searching and passively through Allowing).

Using the matrix helped to clarify, in fact dissipate the ‘great tension between actively painting and intentional research’. When stepping back to take in the picture we had arrived at, the Concept terminus of Research was hinged with the Thinking terminus of Sketchbook: Serendipity [Attention to Emergence] by an overarching reference to Tension, thereby linking interiority to a tensile form of strength, as in a muscle contracting, while exteriority offers release into connectivity, when the opposite points, Overhearing on Sketchbook: Serendipity [Attention to Emergence] and Substance on Research are joined by Expression – sandwiching Actively Painting in between. 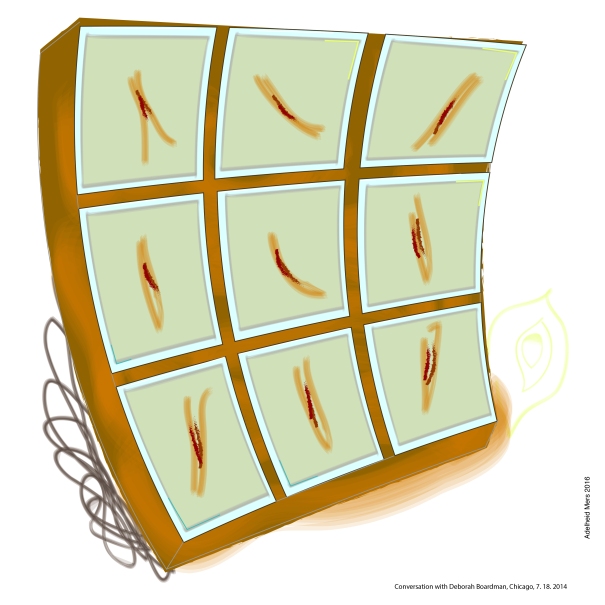 Scenarios are prompted by image cues. Here it was the picture Deborah had evoked, of the canvas opening up, giving way to systemic humanity:

A floor tile tilted up, becoming paper or canvas, while ground support, a raw clay, was still clinging to it, forming a slab. Not wanting to appear like a tombstone (seems only men’s graves are ever said to give birth; well, re-birth – nod to Bowie), this tile/slab/canvas grew into a grid, warped into a wall, architecture (arkhi – chief, tekton – builder). The surfaces opened, albeit not as windows out, but passages in.