Making: Micro-practices for a new gentleness

With this project I want to contribute to the development of a new culture of conversation that can reach across divides. Under the working title “Micro-practices for a new gentleness”, it revolves around small group conversations that are facilitated through a set of art objects. The name was inspired by diagram artist and philosopher Félix Guattari, asking to “organize new micropolitical and microsocial practices, new solidarities, a new gentleness, together with new aesthetic and new analytic practices.”

A visual summary of Guattari’s phrase.

Gentleness in conversation refers to self-regard and respect for other perspectives that often is hard to maintain. News media push outrage. Social media create silos. Conversation skills that exceed persuasion or manipulation need to be developed. In a text titled ‘This is Play’, musician Stephen Nachmanovich wrote “levels of communication connect over, under, around, and through each other. It may be more accurate to say pretzels rather than levels.” With this project, I want to develop an art-based tool kit the use of which helps to unravel what happens in a ‘good’ conversation. The kit will be art-based in three ways. First, I am drawing on good conversations artists conduct all the time. Second, I will create art objects that facilitate good conversations. Third, these conversations will be playful and performative, artistic moments themselves. The goal of the work is for participants to contribute to an exchange that foregrounds play and improvisation.

Reading and mapping Stephen Nachmanovitch’s text, “This is Play” onto The Braid, and exploring ways to represent its elements through small objects. With Ben Zucker, Chloe Rahimzadeh, Lenny Moore, Christine Shallenberg, Daniel Quiroz. 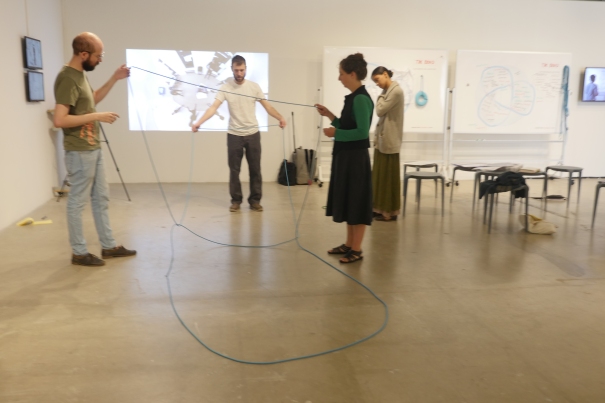 Since September, I have conducted weekly meetings with a group of artists. We started from the premise that artists have specific and generous ways to give each other feedback. We asked: What if artists had communication techniques that could be useful to others? By staging and analyzing such conversations, we found that for exchanges we find valuable, three nested categories apply: 1) beliefs are stated, 2) rules allow beliefs to be enacted, and 3) techniques implement the rules. An example of a belief is “Power relations are always present”, a possible rule is “mediate power relations” and a technique could be “to name uses of power”. We have developed an extended set of those statements. 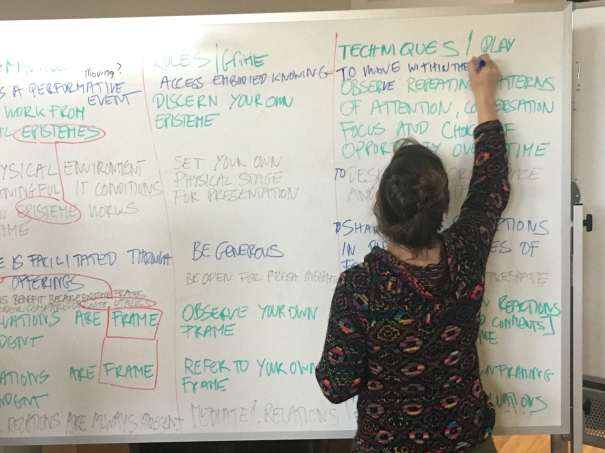 We develop facilitation objects because we believe that it is important to access embodied knowledge. To reach broader audiences, we want to create an experiential and intellectual engagement. To embody these statements in an object-based facilitation kit, we are drawing on two of my previous works. For the overall design of the kit, we reference “The Braid.”This diagram facilitated the conversations with artists about their work. Just as described by Nachmanovich above, it looks somewhat like a pretzel. We will borrow this shape, called a Trefoil, and use it as a string to which our objects will be attached. To create the objects, we use a prompt-based performance piece I created last year with a different group. We will physically perform each phrase, developing a full-body gesture to represent it. Our gestures will then be transformed into small figurines, 3-d printed, and attached to the string.

The video (above) shows screenshots of a 360 degree recording of us performing within the Trefoil. This visualization pointed to how we would create figures for the conversation kit. The image shows a first, rough, rendition in paper clay, of figures we want to develop starting in February 2020, using digital body tracking technology to create digital files from which we can 3-d print. If you scroll back to the top image, Guattari’s phrase, you can imagine that we now embody and will be able to share more concrete versions of the terms he proposes. With Christine Shallenberg, Ben Zucker, Daniel Quiroz, Doreen Chang, Noël Jones.

A prototype of this initial kit, accompanied by a booklet, will be presented at the Index Art Book Fair in Mexico City at the end of January 2020, where we will also offer a facilitation session. Between now and then, we will prototype figures and experiment with the facilitation process. Going forward, we aim to bring the kit to communities across Chicago, to invent new and expand existing facilitation techniques, get feedback and explore adaptations. Connecting with neighborhood arts organizations, we understand these activations with diverse audiences as the core of the art project. We intend to engage in an ongoing co-creation process across the city. Embedded in that will be the conversation techniques we hope to promote. We will document our experiences on a public facing website throughout, and imagine a summary online exhibition at the end of the year. For that, I am interested in using the Research Catalogue as a site, to share this work with both local and international communities.

Addendum: Following the presentation in Mexico City, COVID forced first a suspension, then a shift to an on-line version in August 2021. The first in-person workshop took place in Weimar, in July 2022.